Cointreau goes to the Movies

A great movie and a great cocktail – now that’s a truly winning combination, and one that’s been around much longer than you might think. Way back in 1898, the first-ever film commercial in history was created – and the brand it featured was Cointreau! Since then Cointreau has gone on to become an iconic component of over 350 of the world’s most popular cocktails. So hold a movie night with a difference at your place, or just kick back on your own and chill with an awesome flick and Cointreau cocktail of your choosing.

Here are 3 fabulous Cointreau-based cocktails featured in or inspired by iconic, famous, and award-winning movies. Pick a film, pop some popcorn, or grab your favourite snacks. Then get out your cocktail shaker and hold your own Cointreau Movie Night.

Going to the movies at home has never felt so good. Let’s start with a trip to New York and a cocktail made famous by the women of this incredible city.

Cosmopolitan – featured in the movie Sex and the City (2008)

Sex and the City: The Movie is a 2008 romantic film and a sequel to the HBO comedy-drama series of the same name. Listed as one of the best television series of all time by Time and TV Guide (US), the series premiered in the United States in 1998, and concluded in, 2004, with 94 episodes broadcast over six seasons. Set and filmed in New York City, the series followed the lives of a group of four women – three in their mid-thirties and one in her forties – who, despite their different natures and ever-changing sex lives, remain inseparable and confide in each other.

The series often featured frank discussions about romance and sexuality, which made it a hit with legions of viewers. Fans of the show just couldn’t get enough, which helped to make the movie that followed a smash hit commercial success. Sex and the City: The Movie grossed over US$415 million worldwide and recorded the biggest opening ever for an R-rated comedy and a romantic comedy1 and also for a film starring all women.2

The film stars Sarah Jessica Parker, (as Carrie Bradshaw), Kim Cattrall (as Samantha Jones), Kristin Davis (as Charlotte York Goldenblatt), Cynthia Nixon (as Miranda Hobbes), supported by Chris Noth (as Mr. Big). Picking up where the series left off, it examines the next stage of the protagonists’ lives, tackling weighty issues of parenthood, commitment, infidelity, and friendship with charm and grace, while still managing to be still very funny.

As well as catapulting its stars to global fame, Sex in the City also helped to popularize the Cosmopolitan – a pink-blushed beauty of a cocktail and one of the most revered modern Cointreau classics. The shortened name of "Cosmo" and the drink itself exploded in popularity during the 1990s with frequent mentions on the show, and later in the movie, where it takes pride of place in the grand finale.

The keys to the preparation of a Cosmopolitan are a good brand of cranberry juice and Cointreau, two essential elements to the drink. So why not get your hands on some, gather a few of your besties, and toast to love and friendship with a modern cocktail classic! 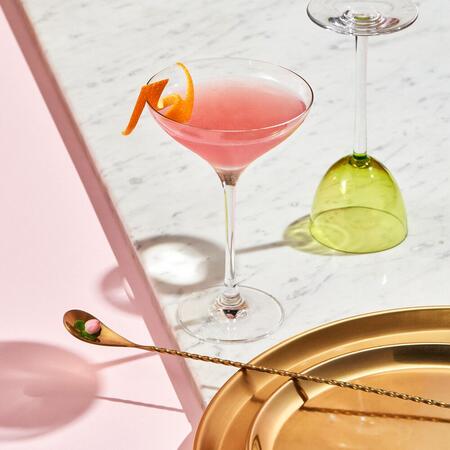 Next, let's venture into an alternative reality with a Cointreau cocktail as amazing to look at as it is to taste.

The Quantum Realm – Inspired by the 2019 film Avengers: Endgame

How do you make a superhero flick even more rip-roaring fun? Pair it with a cocktail with superhero powers of its own. In the movie Avengers: Endgame, the Avengers and their allies must sacrifice all to defeat the mighty Thanos before his catastrophic blitz of terror and ruin brings an end to the universe. Don’t miss a moment of the action as you and your friends take a trip to The Quantum Realm. This brilliant, purple-hued delight obtains its superpowers from Blue Butterfly pea flower tincture – an ancient Thai herbal plant that is incredibly high in antioxidants and highly renowned for its medicinal properties.

Blue Butterfly pea tincture is beloved of creative mixologists and bartenders for its startling blue colour, which is incredibly rare in natural foodstuffs. In The Quantum Realm, this startling blue combines with the acidity of the lemon and grapefruit juice to create truly stunning shades of purple, while adding just a touch of delicious sweetness to the finished cocktail. Mix up a batch at your next soiree, and transport your guests with this inter-dimensional wonder from another realm. You can buy Blue Butterfly pea tincture online. 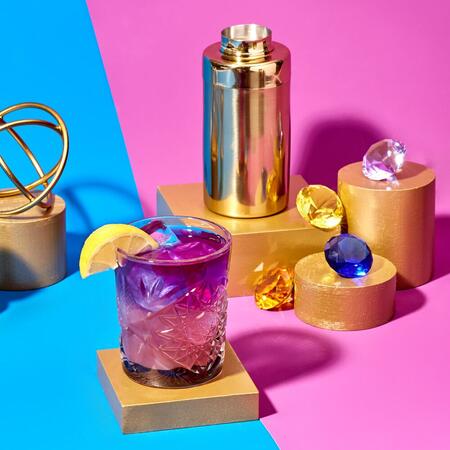 Add Cointreau, rum, and tincture to a shaker tin with ice.
Shake and strain into a rocks glass over fresh ice.
Top with citrus juice and stir to combine to change colors.
Garnish with a lemon wedge.

Once you’ve tried the alternative reality of The Quantum Realm a whirl, why not try something a little different? Something cool and creamy, like the intriguing…

The nightcap of Champions – Inspired by the movie Rocky (1976)

Written by and starring Sylvester Stallone, Rocky is the movie that beat Taxi Driver for the Best Picture Oscar. Rocky Balboa is an uneducated, kind-hearted working-class Italian-American boxer, struggling to break into the big time while working as a debt collector for a loan shark in the slums of Philadelphia. When boxing champion Apollo Creed visits Philly, his managers want to set up a match between Creed and a struggling boxer. Suddenly, small-time club fighter Rocky is thrust into the spotlight, facing off against the unbeaten Creed for a shot at the World Heavyweight Championship. Creed expects to make mincemeat of Rocky, but what follows is one of the greatest fights in cinematic history. Acclaimed as one of the greatest sports movies of all time, Rocky went on to receive ten Academy Award® nominations, winning three including Best Picture.

This film is still an absolute knockout, just like the cocktail it inspired – a creamy and delicious concoction worthy of hard-fighting champions everywhere. After a day of slugging it out, relax with an all-time-classic award-winning movie like Rocky and a Nightcap of Champions. Like Rocky Balboa and Apollo Creed, it is a match made in heaven match. 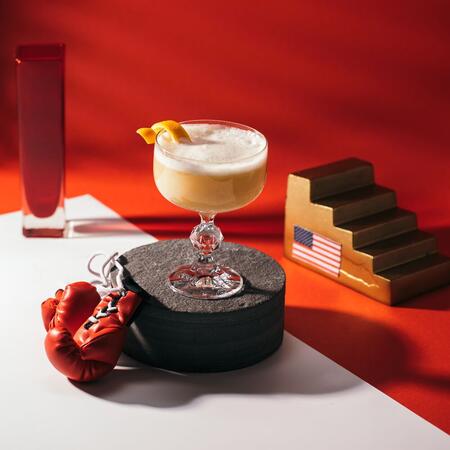 Add all ingredients to a shaker and shake without ice.
Add ice, shake, and fine strain into a coupe glass.
Garnish with an orange peel.

And there you have it – three great reasons to get your besties together or chill out on your own and indulge in a movie with a cocktail to match. Happy viewing!