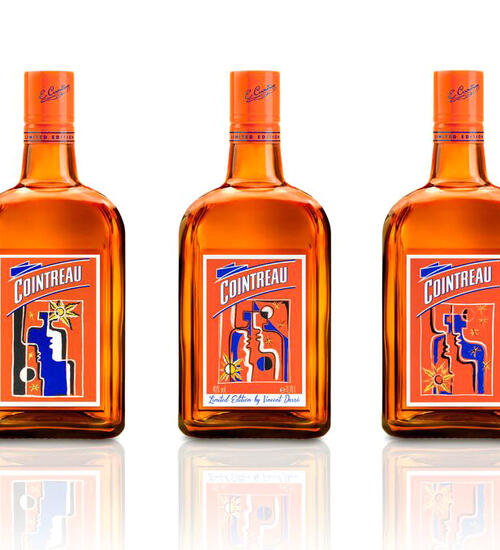 Cointreau celebrates 170 years with a limited edition by Vincent Darre

These beautiful anniversary limited edition bottles are not for sale, in fact, only a handful of bottles made it to Australia, so they’re sure to be a collector’s item.

Outstanding French interior designer mixing styles and eras with unique elegance, Vincent Darré reinterprets the iconic bottle, adorning it with three original scenes. These original scenes poetically tell the story of the Maison Cointreau, the duality of its orange liqueur, and the special moment of cocktail tasting.

Who better than this inspired designer, epitomizing French chic and creativity, to pay tribute to the bold and ingenious spirit of Édouard Cointreau and celebrate the 170th anniversary of the creation of his renowned orange liqueur?

Vincent Darré ‘s creativity knows no boundaries. His unbridled imagination is nourished by historical, literary, and cinematographic references; by travels and personalities from the past and present.  This approach is the very essence of his style. Fascinated by Surrealism and Dadaism, he focuses on the graphic research of images, as well as unencumbered spontaneity. His style is a blend of the elements that have influenced his life: the eccentricity of the 80s, the costumes he created for shows, the years he spent alongside great fashion designers (Karl Lagerfeld, André Putman, etc.) and Maisons (Yves Saint Laurent, Prada, Fendi, etc.). He expresses a wild style in furniture, object collections, and original interiors (The Montana Hotel in Paris, The Baron in New York), and now brings this inimitable esthetic to Cointreau for the creation of this Limited Edition.

“I like to draw inspiration from the past and make something new from it. I looked at Cointreau’s history and this liqueur with its extraordinary flavours immediately reminded me of a bottle of perfume”

A signature ﬂacon of striking modernity, the iconic Cointreau bottle stands out for its distinctive features. At its creation, Édouard Cointreau opted for the sobriety of a four-faced bottle, representing the four ingredients of his liqueur — a distillate of orange peel essence, water, alcohol, sugar — and amber-colored glass that reveals the liquor’s surprising transparency upon pour.

While honoring the bottle’s original form, Vincent Darré reimagines it by creating three distinct labels akin to three original paintings, a ﬁrst in the history of the Maison. He brings his style and name into the tradition of Cointreau, which, since its creation, has collaborated with creators from all domains: ﬁlmmakers (Frères Lumière), illustrators (Jean-Adrien Mercier), poster artists (Loupot, Tamagno), and designers (The Design Laboratory of Central St Martins).

Distributed on all continents, these collectors’ items by Vincent Darré not only reﬂect the inventive spirit of its creator, but also a unique savoir-faire, an outstanding family success, an Angevin heritage, and a proud French origin.

“I liked the idea of creating paintings, and that the four sides of the bottle were different. I wanted to make it possible to imagine, from a single line, the history of the brand and its orange liqueur. ”

The sun withdraws to make way for the moon and stars. The time has come to enjoy the cocktail, a moment of the perfect balance between day and night. I like orange and blue, sharp colours… The bright orange of the fruit and its perfect match: the blue of the oceans these oranges had to cross. ”

With a simple and fluid stroke, Vincent Darré subtly tells the story of the Maison Cointreau.

The profiles of the two faces that complement each other stand out from the paintings and outline the shape of the bottle.  The profiles echo the couple Édouard and Louisa Cointreau, who have worked in harmony to make Cointreau a modern and avant-garde Maison.

The moon and the sun meet, illustrating the end of the day as the ideal time to enjoy a cocktail. Orange and blue prevail in both heritage colors that have defined the Maison Cointreau since its debut.

The visual content of this limited edition was entrusted to photographer duo Sofia Sanchez and Mauro Mongiello, whose notoriety is undeniable. Inspired by Darré himself – who they know well – and his poetic universe, as well as the advertising past of the Maison Cointreau, the duo breathes life into the collaboration through a series of rhythmic and colourful photographs and videos. They portray Vincent’s eclectic showroom with originality and intimacy, where the designer prepares and savors his cocktails.

The duality aspect was particularly inspiring. We had a long discussion with Vincent to set the tone and rhythm of the film, then the atmosphere of the photos.

The idea was to recount Vincent ’s creative process, but also the creation of his signature cocktail: The Sofa.

THIS YEAR, MAISON COINTREAU IS CELEBRATING 170 YEARS OF THE ART OF THE MIX.

This anniversary celebrates more than 300 awards received for the organoleptic qualities of its orange liqueur, participation in the Paris World’s Fairs (1889 and 1900), an advertising heritage that has stood the test of time, the creation of iconic cocktails such as Cointreaupolitan, and its presence in over 350 cocktails.

Whether drunk in Paris, New York, or Tokyo; a classic or imaginative original; the cocktail has risen in fame over recent years. And all over the world, Cointreau is playing an active role in its revival. Thanks to its extraordinary versatility, Cointreau liqueur lends itself to all the major cocktail trends: the inventiveness and vibrancy of the American scene, British conceptual creativity, Australian hedonism, the ritualized approach favored in Asia, and the French technicality.

To accompany this limited edition, Cointreau suggests a cocktail inspired by Vincent Darré an original creation and a reinterpreted classic, featuring unexplored flavours.

It may be in his Parisian showroom on rue Royale, where he welcomes friends, clients, and design enthusiasts. Or in the magnificent Serpent a Plume, a new cocktail venue in Paris, which he has set up on the historic Place des Vosges. The cocktail tasting is always done on a sofa. Considered a key design element, it is this sofa that inspired Alfred Cointreau.

Pour all ingredients directly into a shaker.  Shake vigorously before serving in a chilled martini glass. Garnish with an orange peel and pineapple leaf. Enjoy!

Vincent Darré is an extraordinary creator.  More than an interior designer, he is the master of a lifestyle that is as whimsical as it is elegant. It was the first and foremost fashion that nourished his sense of aesthetics. In major Maisons— Yves Saint Laurent, Montana, Prada, Fendi, Chloé, Moschino—his talent created a story, a point of view. He then spread his wings and devoted himself to the creation of furniture and decorative objects. He designs interiors—hotels, shops, homes—and handles the artistic direction of events and magazines. Like no other, he combines influences and does things his own way, but with distinct expertise and wisdom. He draws his freedom from a deep knowledge of the art world, decorative arts in particular. In 2018, he published Intérieurs surréalistes in which he presents his most beautiful projects.

Alfred Cointreau is part of the sixth generation of the Cointreau family, whose great-great-great-grandfather created the famous Angevin liqueur in 1875. In charge of the brandâ€™s heritage, he is the guardian of the family history, as well as spokesman and ambassador for the Maison.  He blends heritage with modernity and strives to make the brand radiate throughout the world, especially in the bartender community with which he shares his love of cocktails.

World-renowned photographers Sophia and Mauro left Argentina, where they met, and settled in Paris in the early 2000s. Soon after, their photos were featured in the world’s most prestigious publications like the New York Times, Numéro, Flair, Vogue, and Vanity Fair. Fashion series, portraits of stars, advertising campaigns… Their images stand out for their sophistication, a blend of force and gentleness in which color often plays an important role.

Since its creation in 1849, the Cointreau brand expresses the same playfulness, driven by the creative impulse that gave it life. Balance, moments, pleasure, style… even in its creation. The clear liqueur recipe has retained its original authenticity since its creation. Its character and excellence lie in the rigorous selection and assembly of the sweet and bitter orange peel essences, a meticulous task entrusted to Maison Cointreau’s Head Distiller. Cointreau is the world’s leading premium orange liqueur and enjoys a longstanding presence across 5 continents. Its superior quality makes it a favorite amongst bartenders and has earned it a place in the most respected bars around the world.