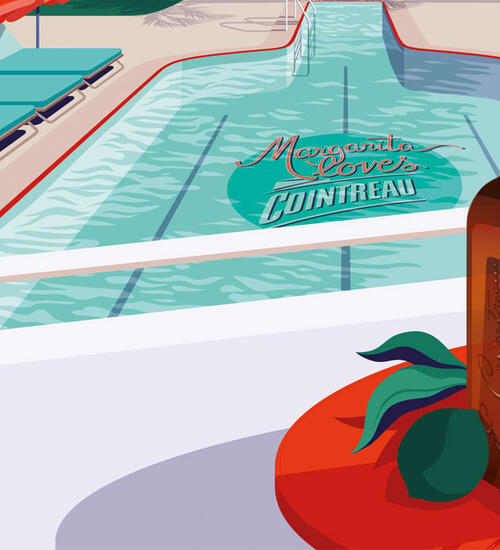 MARGARITA & COINTREAU HAVE BEEN INSEPARABLE SINCE THE CREATION OF THE COCKTAIL IN 1948
Throughout May Cointreau will mark the 70th anniversary of the margarita with a series of festive “Margarita Loves Cointreau” pop-up events around the cointry. These events will bring the energy of Acapulco to life and celebrate the intrinsic relationship between Cointreau and the margarita cocktail. As the cocktail’s creator famously said of her instantly iconic drink, “A margarita without Cointreau is not worth its salt.”

Back in 1948, Margaret “Margarita” Sames, a wealthy American socialite known for hosting notoriously lavish parties with extravagant twists, created a new cocktail for one of her soirées. She simply mixed two of her favourite spirits: tequila and Cointreau, a liqueur crafted using sweet and bitter orange peel essences at one of her parties in Acapulco, Mexico. Consequently, her friends nicknamed the drink “Margarita” after her. An immediate success, the drink came to be known as a “margarita” and was later adopted in popular bars around the US. Some of her as regular guests included Nick Hilton, founder of the Hilton hotel chain, Joseph Drown, owner of the Hotel Bel-Air in LA and other influential people who helped popularise the drink.

Cointreau, created by Edouard Cointreau in 1875 after noting customers’ interest in the flavour of orange, a rare and expensive commodity at the time. Edouard Cointreau travelled the world and continuously experimented with recipes and distillation processes until he created the perfect blend. Cointreau began to bottle his creation, which has gone on to become the emblematic liqueur liquor we know today. Mentions of Cointreau can be found in mixology manuals as early as 1922. By the start of the 20th century, Cointreau became a mainstay for bartenders who coveted its clear composition and versatility. Its bold orange flavour and incomparable freshness have earned Cointreau a place in over 350 cocktail recipes, including, of course, the margarita.

WHY HAS THE MARGARITA LASTED THE TEST OF TIME?
Alfred Cointreau, the great-great-grandson of Edouard Cointreau states that the margarita has stuck around in the pantheon of classic cocktails for so long simply because it not only tastes good, there is something about that specific combination of flavours that makes the drink stand out.

Today, Cointreau is a ‘must-have’ in every bar or restaurant due to its versatility and quality.

Throughout May, every bottle of Cointreau features a neck tag with the famous original Margarita recipe. So, now’s the perfect time to head down to your local liquor store to pick up yours.