Outstanding French interior designer mixing styles and eras with unique elegance, Vincent Darré has reinterpreted our liqueur’s iconic bottle for our 170th anniversary, adorning it with three original scenes. These scenes poetically tell the story of Maison Cointreau, the duality of its orange liqueur, and the special cocktail tasting moment. A year later, he created Cointreau’s Coffret “Surréaliste” Margarita, a very-limited edition of 17 bespoke cocktail box sets handpicked by the extravagant decorator.

Who better than this inspired designer, epitomizing French chic and creativity, to pay tribute to the bold and ingenious spirit of Édouard Cointreau and the iconic Margarita? 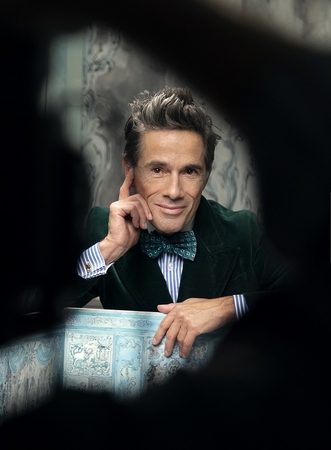 If you could define Vincent Darré's approach to life in one phrase, this might just be it. Vincent Darré is a creative troublemaker with a spirited temperament, one of those characters that make you want to toast to life. The proof? The multifaceted, effervescent, versatile designer's recipe for happiness: a Margarita with a sea view, dressed in elegant dinner attire, at the hour when creative thoughts blossom, and in an atmosphere reminiscent of the Belle Époque.

Darré is a solar social butterfly who has tamed contrasts to build an aesthetic of his own: an interplay between light and shadow, sun and moon, hues of blue and orange... And it’s a visual exploration that he takes all the way to the cocktail glass. Whether at a famed Paris bar that he entirely redesigned, or busy creating the Cointreau’s Coffret “Surréaliste” Margarita, Vincent Darré turns every "cocktail moment" into an exciting playground. 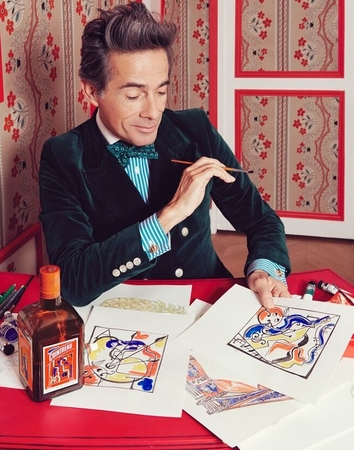 We sat down with Vincent Darré in his whimsical Parisian offices to hear his secrets for bringing a dose of magic into everyday life, his dreams, which span the South of France and the world's fashion capitals... all with a Ginger Margarita in hand. This joyful interview is a treat to both our moods and eyes. A truly feel-good and refreshing interlude.

We enter through a red-orange room filled with unconventional objects, and then proceed to a living room where blue, gold, and velvety textures blend perfectly to create a surprisingly harmonious atmosphere. Our eyes are alert as a smile is irresistibly drawn on our faces… It's so obviously a Darré interior. The artist’s philosophy—joy of living as a standard and creative exploration as a principle—works its magic.

"You have to approach life like a movie and try to be the best actor you can. And the same applies to the preparation of a good cocktail: It should be an amazing, a singular moment of wonder." 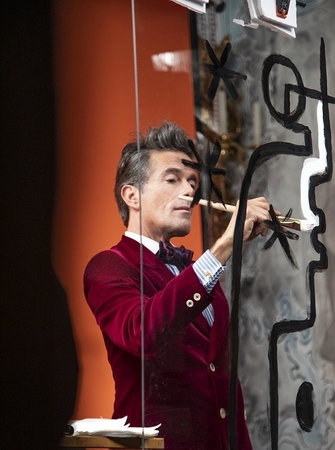 In a career spanning more than 30 years, stretching from Paris to Milan, Rome, and New York, Vincent Darré has left his whimsical and sophisticated signature in some of the most prestigious creative Maisons and the world's most elegant hotels and restaurants. His art is an expression of playfulness and his guiding principle: enveloping materials, radiant colors, and elegantly curved shapes are all in the mix. Vincent Darré has made his unfailing jubilation into a distinctive creative method, both uninhibited and unpretentious. Everything Vincent Darré touches turns to joy, like the iconic Cointreau bottle he reinterpreted. Approached as genuine paintings by the designer, its four sides pay homage not only to the liqueur's balance, but also to the creativity that has marked the rich history of the Angevin house.

"Cointreau is both an olfactory and graphic exploration... It reminds me of the ever-evolving worlds of fragrance and fashion." 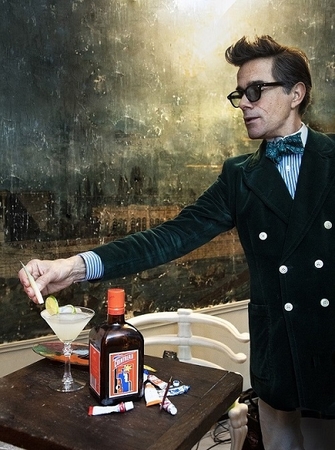 Darré's first memory of Cointreau is that of a glass enjoyed on a terrace at Saint-Paul-de-Vence in the South of France, where the liquor enchanted an impromptu moment, with the Mediterranean Sea as a backdrop. An almost dreamlike scene where an actress from the 50s would have fit right in.

Vincent Darré has skillfully cultivated his dreamy approach, along with his taste for all things mixology. During his strolls in Paris's biggest flea market, his cheeky eye is often caught by chiseled vintage glasses, destined to serve Margaritas to cocktail enthusiasts from all over the world. “And why not add a little kitsch umbrella on top? It might seem absurd, but life is meant to be lived with humor!" he replied.

Darré’s set-up for a dream cocktail? Sipping at nightfall, or during a summer afternoon in the middle of an orange grove, where the beauty of the fruit and the citrusy scents intoxicate the soul.

"The orange is a vitalizing fruit. When I travel to Morocco to see orange trees, I am always amazed by the sunny charm of the orange."

Speaking of cocktails, here is Vincent Darré's recipe for making every cocktail a unique experience: an elegant attire from the "New Look" years, a ginger or matcha twist on the Margarita, a copper bar like one in a bar in Havana, and in the company of free-spirited souls.

In short, Vincent Darré, teaches us an invaluable lesson: that life is meant to be joyful. That the way we think and behave can sublimate and transform every moment into a delightful one.

"Fun is part of my job. I don't take myself seriously, but I take my work seriously." 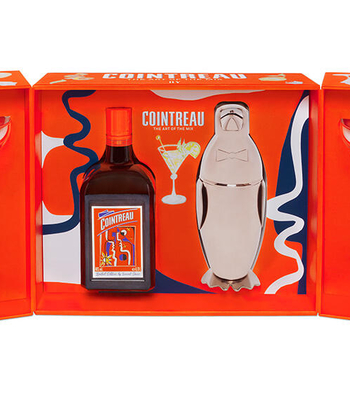 The Maison Cointreau and Interior Designer Vincent Darré are joining forces for a second year in a row to celebrate the Art of Cocktail and the iconic Margarita.