Maison Cointreau is celebrating 170 years of the art of the mix by entrusting Vincent Darré with the creation of its Anniversary Limited Edition.

Outstanding French interior designer mixing styles and eras with unique elegance, Vincent Darré reinterprets the iconic bottle, adorning it with three original scenes. These original scenes poetically tell the story of the Maison Cointreau, the duality of its orange liqueur, and the special moment of cocktail tasting. 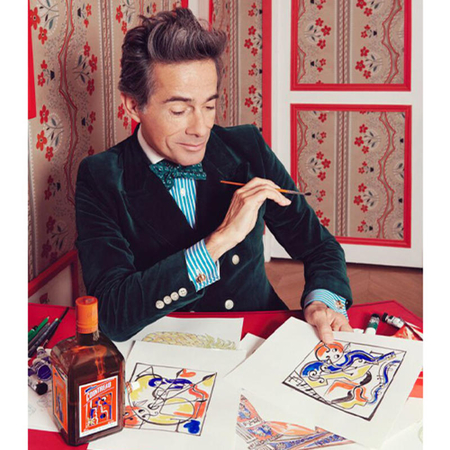 "I like to draw inspiration from the past and make something new from it. I looked at Cointreau's history and this liqueur with its extraordinary flavors immediately reminded me of a bottle of perfume."

Vincent Darré’s creativity knows no boundaries. His unbridled imagination is nourished by historical, literary, and cinematographic references; by travels and personalities from the past and present. This approach is the very essence of his style.

Fascinated by Surrealism and Dadaism, he focuses on the graphic research of images, as well as unencumbered spontaneity. His style is a blend of the elements that have influenced his life: the eccentricity of the 80s, the costumes he created for shows, the years he spent alongside great fashion designers (Karl Largerfeld, Andrée Putman etc.) and Maisons (Yves Saint Laurent, Prada, Fendi, etc.).

He expresses a wild style in furniture, object collections, and original interiors (The Montana Hotel in Paris, The Baron in New York), and now brings this inimitable esthetic to Cointreau for the creation of this Limited Edition. 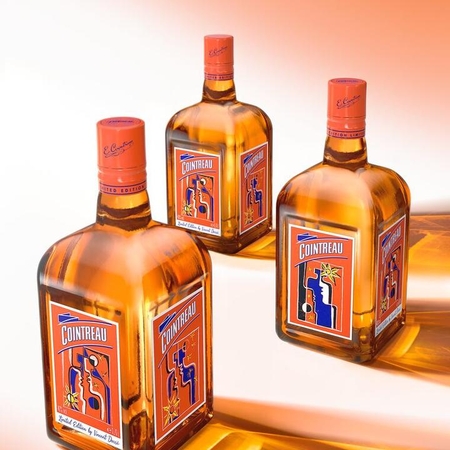 A signature flacon of striking modernity, the iconic Cointreau bottle stands out for its distinctive features. At its creation, Édouard Cointreau opted for the sobriety of a four-faced bottle, representing the four ingredients of his liqueur — distillate of orange peel essence, water, alcohol, sugar — and amber-colored glass that reveals the liquor’s surprising transparency upon pour.

While honoring the bottle’s original form, Vincent Darré reimagines it by creating three distinct labels akin to three original paintings, a first in the history of the Maison. He brings his style and name into the tradition of Cointreau, which, since its creation, has collaborated with creators from all domains: filmmakers (Frères Lumière), illustrators (Jean-Adrien Mercier), poster artists (Loupot, Tamagno), and designers (The Design Laboratory of Central St Martins).

Distributed on all continents, these collectors’ items by Vincent Darré not only reflect the inventive spirit of its creator, but also a unique savoir-faire, an outstanding family success, an Angevin heritage, and a proud French origin. 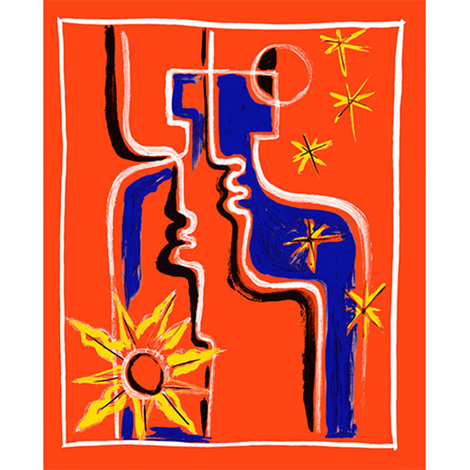 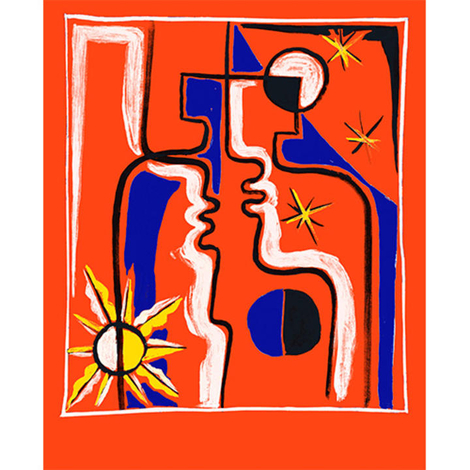 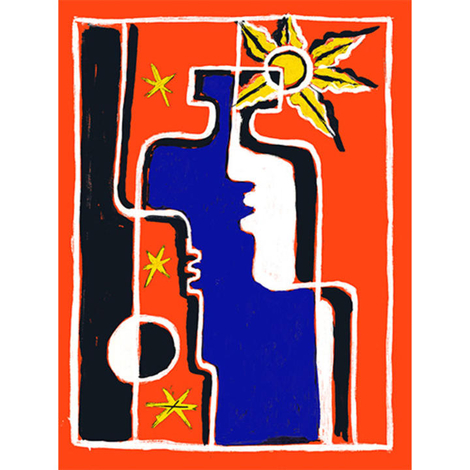 I liked the idea of creating paintings, and that the four sides of the bottle were different. I wanted to make it possible to imagine, from a single line, the history of the brand and its orange liqueur.

With a simple and fluid stroke, Vincent Darré subtly tells the story of the Maison Cointreau.

The profiles of the two faces that complement each other stand out from the paintings and outline the shape of the bottle. The profiles echo the couple Édouard and Louisa Cointreau, who have worked in harmony to make Cointreau a modern and avant-garde Maison.

The moon and the sun meet, illustrating the end of the day as the ideal time to enjoy a cocktail. Orange and blue prevail, both heritage colors that have defined the Maison Cointreau since its debut.

"The sun withdraws to make way for the moon and stars: the time has come to enjoy the cocktail, a moment of perfect balance between day and night. I like orange and blue, sharp colors... The bright orange of the fruit and its perfect match: the blue of the oceans these oranges had to cross."

"The cocktail is kind of a surprise, an opportunity to explore new flavors." Vincent Darré

Whether drunk in Paris, New York, or Tokyo; a classic or imaginative original; the cocktail has risen in fame over the recent years. And all over the world, Cointreau is playing an active role in its revival. Thanks to its extraordinary versatility, Cointreau liqueur lends itself to all the major cocktail trends: the inventiveness and vibrancy of the American scene, British conceptual creativity, Australian hedonism, the ritualized approach favored in Asia, and the French technicality. 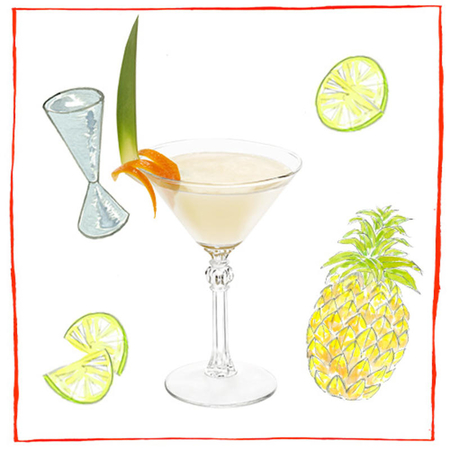 "Vincent Darré designs sofas and armchairs, often made of velvet, a precious, smooth material. I wanted to recreate this suppleness with a cocktail as original as the man, and as soft as his armchairs" Alfred Cointreau

Vincent Darré’s originality is such that a cocktail creation inspired by him was a must. Alfred Cointreau, a member of the sixth generation and Heritage Manager of the Maison Cointreau, was inspired by these places that make — and are — Vincent Darré... those in which he lives and those he designs.

It may be in his Parisian showroom on rue Royale, where he welcomes friends, clients and design enthusiasts. Or in the magnificent Serpent à Plume, a new cocktail venue in Paris, which he has set up on the historic Place des Vosges. The cocktail tasting is always done on a sofa. Considered a key design element, it is this sofa that inspired Alfred Cointreau. 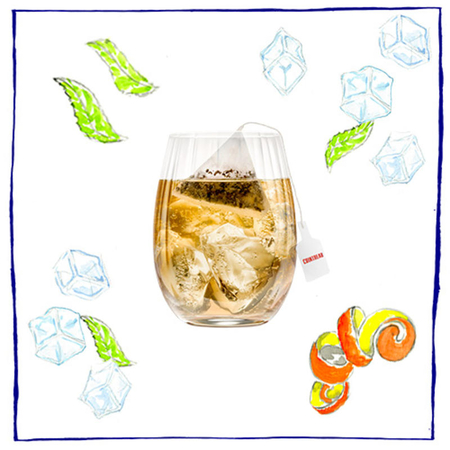 As a reference to the signature cocktail of the Maison Cointreau, Cointreau Fizz Tea is a variation Vincent Darré’s favorite drink: tea.

Composed of three ingredients, it can easily be prepared at home. With a balanced taste, it enhances the richness of Cointreau’s aromatic profile. 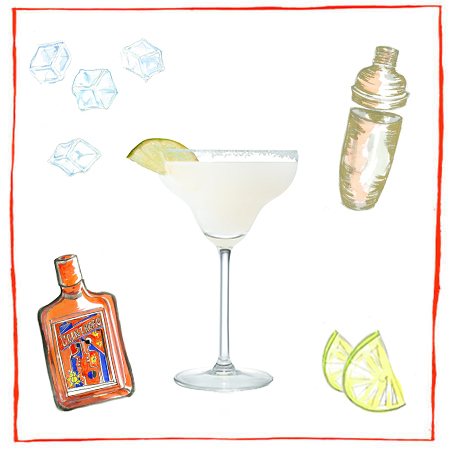 Invented in 1948 by Margaret Sames, the original recipe is straightforward and has remained unchanged since its creation. Cointreau and the Margarita are so inseparable that Margaret Sames is said to have firmly declared: “A Margarita without Cointreau is not worth its salt.”

Since its inception, this timeless concoction has gone on to become a true classic and inspired countless variations around the world. Refreshing and versatile, it’s no wonder the Margarita is the #1 cocktail in the United States, 5th in France and 6th in the United Kingdom. 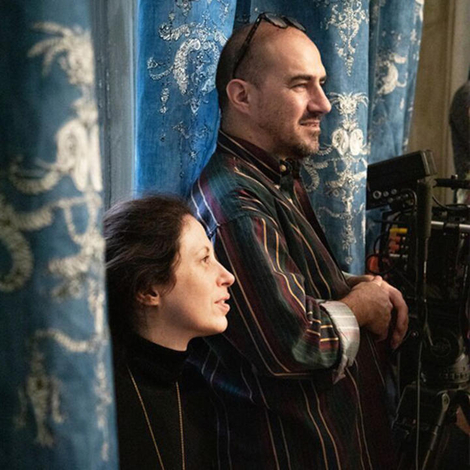 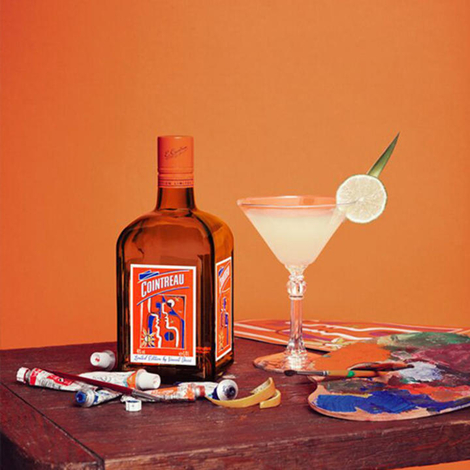 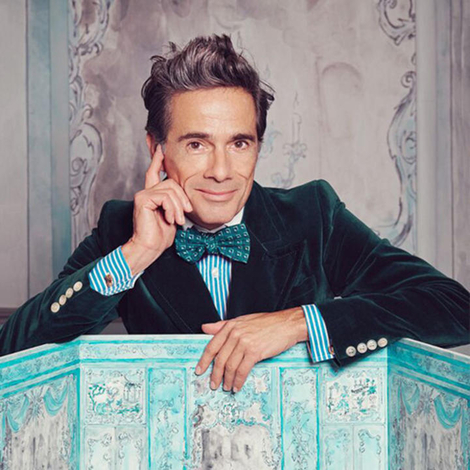 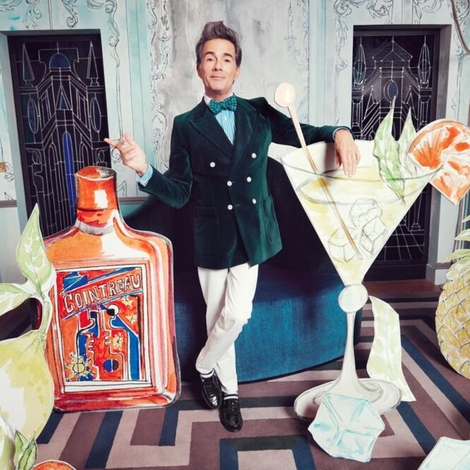 The visual content of this limited edition was entrusted to photographer duo Sofia Sanchez and Mauro Mongiello, whose notoriety is undeniable. Inspired by Darré himself — who they know well — and his poetic universe, as well as the advertising past of the Maison Cointreau, the duo breathes life into the collaboration through a series of rhythmic and colorful photographs and videos. They portray Vincent’s eclectic showroom with originality and intimacy, where the designer prepares and savors his cocktails.

"The duality aspect was particularly inspiring. We had a long discussion with Vincent to set the tone and rhythm of the film, then the atmosphere of the photos. The idea was to recount Vincent's creative process, but also the creation of his signature cocktail: The Sofa." Sofia Sanchez & Mauro Mongiello

Discover more about the duo 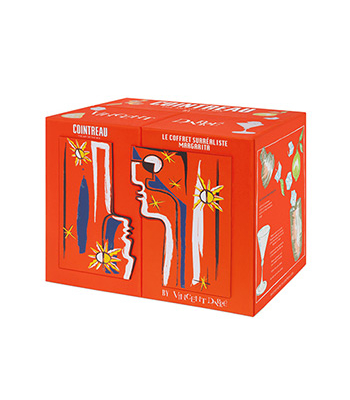 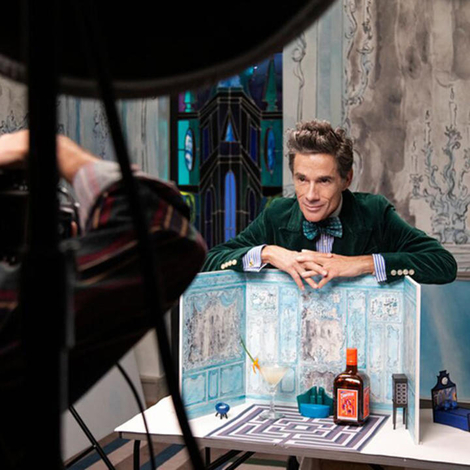 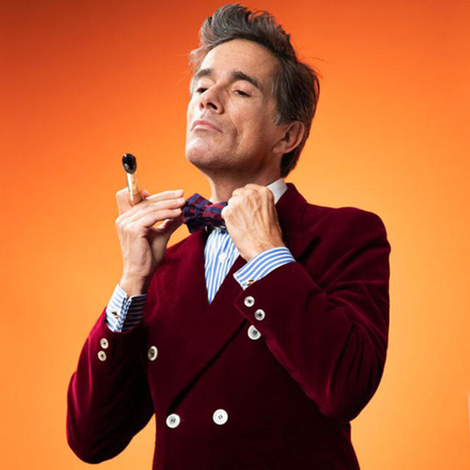 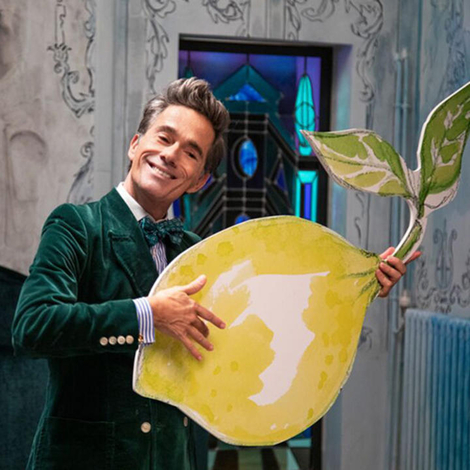 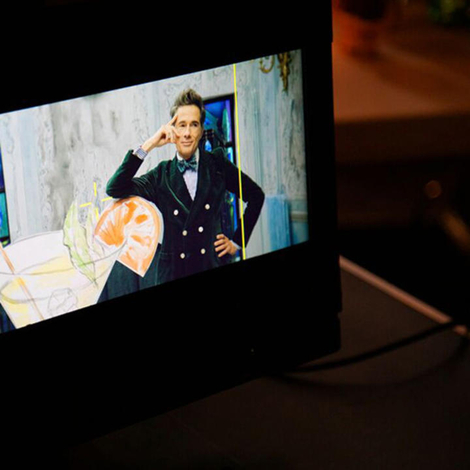